In 1992, a University of Rochester pharmacologist named Michael Weintraub published a study on a drug combination that appeared to produce never-before-seen weight loss. By week 34, his subjects — 121 volunteers — lost, on average, 30 pounds. What’s more, they rated the fenfluramine-plus-phentermine regimen not only more helpful than placebo, but also not terribly “bothersome.”

The tiny study launched the diet pill craze known as “fen-phen.” Doctors began prescribing the drug cocktail off label, meaning for uses other than those formally endorsed by health regulators. Within a few years, six million Americans were taking it.

But something was, in fact, seriously “bothersome” about fen-phen, flagged first by a 1997 report published in the New England Journal of Medicine

suggesting it likely caused serious valve problems in 24 women with no known history of cardiac disease. By the end of the year the drug was pulled from the market.

Three years later, Meridia, a top-selling weight loss drug in Canada, was voluntarily withdrawn by its makers over an increased risk of heart attack, stroke and cardiovascular death.

Now, however, the pharmaceutical industry is bringing anti-obesity drugs back to the market. Several have been approved in the last few years, and many more are likely to come.

The demand is certainly there. The number of people living with obesity nearly tripled between 1975 and 2016. And while it’s not clear exactly why — genetic factors? ultra-processed foods? bacteria in the gut? childhood sugar intake? — what is clear is that once weight is gained, it’s exceedingly difficult to lose and even harder to keep off.

However you look at it, obesity is deleterious for health — functionality, mental health and metabolic health

Bariatric surgery is the most successful treatment for obesity, bar none. However, many people either don’t qualify or would rather avoid invasive surgery, which isn’t without its own risks. Even those who opt for surgery can face wait times of up to eight years.

The appeal of next-generation drug treatments for obesity is obvious. The question is whether the mistakes of the past can be overcome.

Dr. Sean Wharton, an internal medicine specialist at McMaster University, is among the optimists. “This time around,” he says “we know much more about the biology and pathophysiology of obesity.”

Before 2010, the prevailing theory was that the way to spur weight loss was to get people to burn more calories. “Everyone felt that if we could just get a medication that increased metabolic rate, that would work,” says Wharton.

However, when you chemically drive metabolism, as the amphetamine-like fen-phen did, you also start to push a lot of other bodily processes as well, including heart rate. “Everything starts moving faster and causes lots of problems.”

Wharton, who is also the director of the Wharton Medical Clinic for weight and diabetes management in Burlington, Ont., has been part of advisory board meetings for several pharmaceutical companies. But he is not alone in his belief in the future of drug treatments.

“We’re coming out the other side now,” he says. “We have effective and safe medications that are already making significant changes in someone’s ability to lose weight and keep it off.” 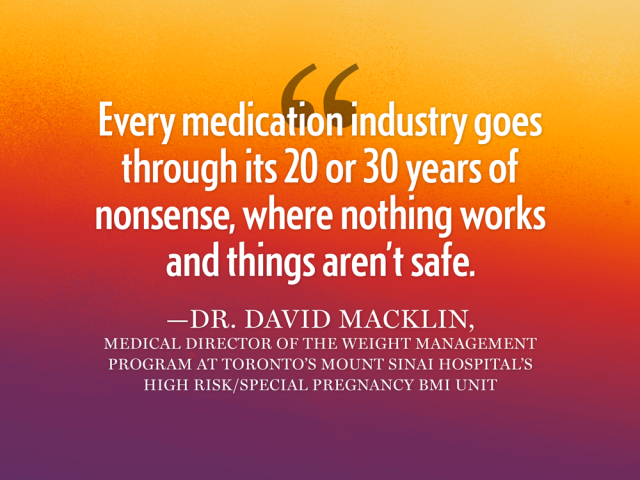 The oldest drug on the market was approved by Health Canada in 1999. Called Xenical, or orlistat, it appears to prevent roughly one-third of dietary fat from being absorbed by the intestines. Instead, the fat is excreted in feces, which contributes to its rather unpleasant side effects, such as fatty and oily stools.

Contrave, authorized last year, combines low doses of the addiction drug naltrexone, used to treat alcohol and opioid dependence, and the anti-depressant, bupropion. The drugs are thought to work on two separate areas of the brain, decreasing hunger and possibly cravings.

Saxenda, a once daily injected drug produced by the Denmark-based pharmaceutical giant Novo Nordisk, works on the brain as well. But it’s also part of a new drug class that’s generating “the greatest excitement,” according to review published last year in The Lancet Diabetes & Endocrinology.

Saxenda, or liraglutide, is a glucagon-like petide-1 analogue, a rather unwieldy name for a drug also known as a GPL-1 receptor agonist. GPL-1 is a hormone naturally secreted by the body when glucose or fat is ingested. Originally developed as a diabetes drug, it slows gastric emptying and regulates insulin production. But when the drug was initially tested on people with type 2 diabetes, many in the clinical trials also lost weight.

GLP-1 binds to receptors in the hypothalamus, the part of the brain that regulates our heart rate, blinking, breathing — and hunger. The hormone acts on the brain, as well as the stomach and pancreas, to increase feelings of satiety. A study published this year in Nature found that, when combined with intensive behavioural therapy, liraglutide affects appetite and preoccupation with food.

Unlike orlistat, which only prevents food from being absorbed once we’ve eaten it, “liraglutide works to prevent patients from even consuming these calories in the first place,” Wharton wrote in a 2017 review of weight loss medications published in the journal Diabetes, Metabolic Syndrome and Obesity: Targets and Therapy.

Novo Nordisk is now developing a similar hormone — semaglutide, licensed for diabetes under the name Ozempic — for people with obesity. It’s injected only once a week, but appears to be almost twice as effective as Saxenda.

Wharton was a lead author on an international study, funded by Novo Nordisk and published last year in the Lancet, in which nearly 1,000 people were randomly assigned to receive either semaglutide, Saxenda or a placebo on a daily basis. Those in the semaglutide group lost more (up to 14 per cent of their initial body weight) than the Saxenda group (eight per cent) after 52 weeks of follow-up.

Side effects for semaglutide included nausea, constipation and diarrhea. GLP-1 is unsafe for patients with a history of pancreatitis. And for full safety effects, “you need years on a drug,” Wharton acknowledges.

“But at the very least,” he says, “We’re showing people are staying on the medication for a longer period of time, because it’s tolerable, and it’s working.”

Drugs alone will not address the two-thirds of Canadian adults living with either overweight or obesity. All of the anti-obesity medications currently available in Canada are intended for use in conjunction with a reduced-calorie diet and exercise. The cost of medications can be prohibitive as well. Some run to $ 4,000 or more a year; none are covered by provincial public drug benefit plans. In the United States, guidelines recommend pharmaceutical treatments only for patients with a BMI of 30 or greater, or a BMI of 27 with at least one weight-related “comorbidity,” or health condition.

But lifestyle changes alone also have a limited impact on obesity rates. Almost every single study has shown that weight loss is usually limited to three to 10 per cent of initial body weight with behavioural treatments (some, like Wharton, say even that is too generous, and that it’s closer to three to five per cent).

Even a five per cent weight loss is considered enough to improve weight-related health problems like pre-diabetes and high blood pressure. According to a 2018 piece in the Lancet Diabetes and Endocrinology, however, most people regain at least some of that weight after a year.

That’s not because of a lack of will power. On any given day, 10 million Canadians are dieting. But no matter the diet, write Dr. Daniel Bessesen, of the University of Colorado, and Dr. Luc Van Gaal, of the University of Antwerp, once weight is shed the body dials down the amount of energy expended at rest and undergoes changes in insulin sensitivity that favours fat storage. “Long-term studies suggest that these changes are probably permanent,” they add.

Anti-obesity drugs don’t work for everyone. Those who do benefit must keep taking them, Bessesen and Van Gaal write, if they want to keep their weight down. All studies of anti-obesity meds have shown that, when the drug is stopped, “weight increases gradually to the level seen with lifestyle changes alone.”

So far, there’s no Hail Mary drug for obesity, no game-changer, says Dr. Eric Ravussin, editor-in-chief of the journal Obesity and associate executive director for clinical science at Louisiana State University’s Pennington Biomedical Research Center in Baton Rouge. We still don’t fully understand the underlying mechanisms that make it so hard to keep lost weight off, he says. When leptin, the appetite-suppressing hormone was discovered 25 years ago, scientists hoped they’d found the elusive cure for obesity — until they discovered many people with obesity are resistant to leptin, not deficient in it.

Still, Ravussin sees medical treatment as a way to help bolster the chances. He’s particularly impressed with drugs that act on GLP-1 and other peptides in development.

“However you look at it, obesity is deleterious for health — functionality, mental health and metabolic health,” he says. Yes, the history of medical treatments, the early attempts at anti-obesity pills, “has been a bit of a train wreck,” he says.

But “drugs will be important for the management of obesity and, I think, especially for weight loss maintenance.”

“With the now acceptance of injectable (peptides) we will have more success and probably less side effects.”